The Japanese government is planning to reform the National Center Test for University Admissions ( “Center Test”) and introduce a new achievement test to assess academic achievement of applicants to universities more accurately.

As one of the high school students affected by the introduction of this new standardized test, I am eager to know when it will start and what it will be like and furthermore, why is the new test system being launched now?

According to the protocol, the Center Test aims to assess test takers’ basic learning and performance in high school to help public and private universities evaluate how well applicants are academically prepared for college. How the test score will be used is up to each university.

One of the major criticisms of the Center Test is that it is only offered once a year. Even if the test takers miss the exam due to illness or any other reason, it can not be rescheduled and they have to wait until the next year. Their efforts over the years are in vain in such cases. The second problem is its multiple choice format. It is often said that you might get a right answer in the Center Test by rolling a pencil as a dice and get a high score by chance.

The new test will use the frameworks of the GCSE level and the GCE-A level in Britain, the SAT in the US and the baccalaureat in France as references. However, every test has pros and cons. Therefore, I interviewed young British journalists of Headliners, Children Express (CE)’s sister organization, who had taken GCSE during my visit to three Headliners offices as part of CE’s summer program in 2013. 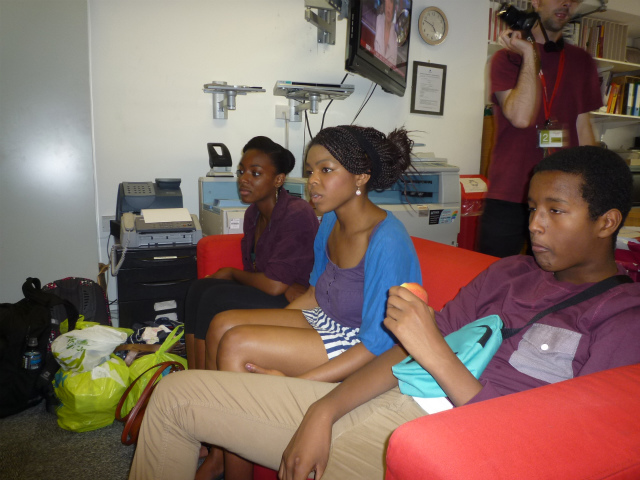 One of the major differences from the Japanese Center Test is that the British test is divided into two levels: the GCSE level and the GCE-A level. The first one is designed for ninth grade students in junior high school and the score can be also used to prove qualifications for those who do not continue on to college and seek a job. Some of them may choose vocational schools, but they are not so popular because of the expensive tuition. For young people who start working right after school, the GCSE score is the only certified qualification. Regarding the disadvantage of the system, those who had already taken the test as well as those who are preparing to do so said unanimously, “It is too early to decide your future at that age.”

After taking the GCSE, the next stage is the GCE-A level, a prerequisite for university admission and similar to the Japanese Center Test. Test takers can choose the subjects depending on their chosen college enrollment requirement. On the one hand, it enables them to discover their competencies and inspires their curiosity given a broad range of subject choices; but on the other hand, if they change their mind on what to do in the future after starting preparing for the test, they may also need to change the subjects. Although it is possible to do so, in reality it is difficult to catch up with the studies afterwards.

After interviewing those who had taken the GCSE and the GCE A level, I found that in Britain, high school students have to decide what they want to do in the future early as they have to choose the subjects they will study for the exams. Many of young journalists of Headliners whom I interviewed felt that the Japanese center test is better than the British test system; if you make continuous efforts on study, you will get good scores in Japan and even when you have no idea what the correct answer is, at least you can pick up one answer randomly from multiple choices. However, the majority thought that the British style encourages students to think about their future career early.

I discovered that the British government is planning to reform their test system by implementing “international baccalaureat” for middle school and high school students which can be granted after completing the education program certified by International Baccalaureat Institution. To learn about the reform, I contacted the Ministry of Education.

The main purpose of this reform is to meet the demand from the universities and employers with stricter verification of the precise level of the applicants’ achievements. The historical survey of the British tests shows that applicants’ academic levels have not always matched their selected majors in the universities. The new test will be designed to focus more on the applicants’ intellectual activities than their test skills in order to assess their deep knowledge and intelligence.

While Japan is trying to overhaul the university admission test system, the British test system, one of the model systems for Japan, is also going through transformation. How the Japanese new test is reformed and when such a new test is introduced should be announced well in advance to students, schools and prep schools to reduce their anxiety and unnecessary confusion.